Learn about these delicacies of the season at the Christmas Market this year. After tasting them, try some of these recipes below for your own taste of Bratislava Christmas at home.

Ciganska pecienka is a heavily seasoned pork cutlet or chicken breast filet. It's usually marinated and then fried or grilled. Frying is more common. Usually, frying means that there is a giant griddle covered in onions, pork, and chicken, with bubbling grease an inch deep. "A ciganska" is commonly served at the Christmas Market on a bun, with caramelized onions, mustard, and optional hot peppers. The name is often translated into English as "gypsy liver." As one observer of Slovak culture has pointed out:
"…although most Slovaks might think of 'pecienka' as a 'little liver', what it really means is a 'roast' from the word 'peceny' – roasted…What sounds to many Slovaks as a 'gypsy liver' really means a 'gypsy roast', or in other words – a roast gypsy style."

Varene vino is a wine that has been warmed with spices such as cinnamon and cloves, but can also contain many other interesting flavor combinations meant to remind one of the yuletide season such as – orange or lemon peel, cardamom, ginger, juniper berries, allspice, and even whole black peppers. Some vendors will add a touch of sugar to their varene vino, or a hint of a sweet juice such as apple or orange juice. 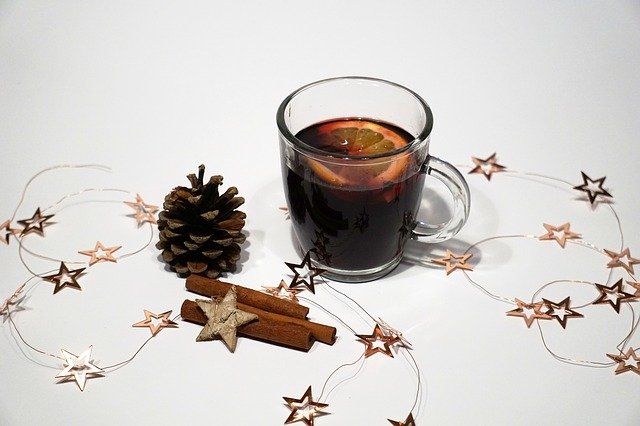 An often unexpected aspect of varene vino, or any steaming alcoholic drinks is that accidentally breathing too much of the steaming vapor of the wine while drinking can lead to a headache and inebriation. The vapors are absorbed into the thin membrane of the airway and are promptly moved into the blood. Steer clear of that and you'll be plenty happy as you sip your wine and keep your hands warm no matter what part of the northern hemisphere you're in this winter.
You will find a recipe for varene vino here.

Pronounced with a "oo" sound that makes the word fun to say, punc is similar to the English word "punch." Punc is varene vino (hot spiced wine) with a little juice, rum, and pieces of chopped fresh or dried fruit thrown in. A cup of punc often looks more appealing that a cup of varene vino, because the unfamiliar always catches the eye better than the familiar.

Punc has interesting pieces of fruit floating along the top of it, which tends to be an immediate attraction to the eyes in a busy Christmas market as passersby wonder what interesting fruit some inventive stand owner has taken to adding to his or her punc. In Bratislava, a punc is sometimes even served with a fork for eating the fruit. 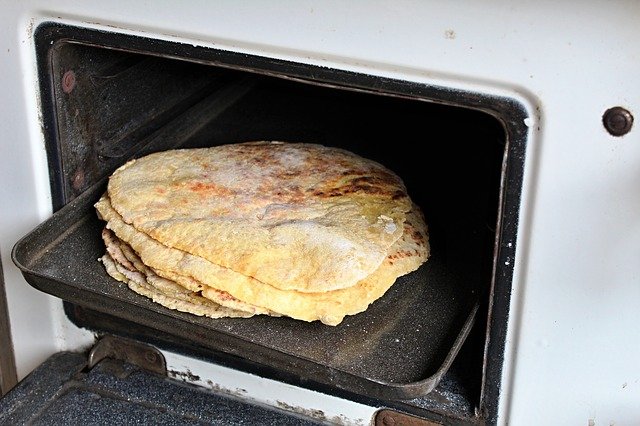 Lokse is potato dough with lots of flour fried on a hot pan. This is the carbohydrate-heavy delicacy of the Christmas Market. It is heavy, not light like a crepe (palacinky in Slovak) or fluffy like a pancake (lievance is a Slovak cousin to the American pancake). Covered with anything from the salty – cabbage, sauerkraut, melted lard, goose liver pate, duck liver pate, even chicken liver pate, cheese, oškvarky – to the sweet – poppy seed, ground walnut, caramel, chocolate syrup, cinnamon, sweet cheese, it's a great deal of fun walking around the Christmas Market and stumbling upon a booth that has dreamed up a lokše topping that you may never have thought of. Blue cheese, cheese and garlic, sour cream and cheese are all combinations that I've noticed this year at the Christmas Market but not in years prior. 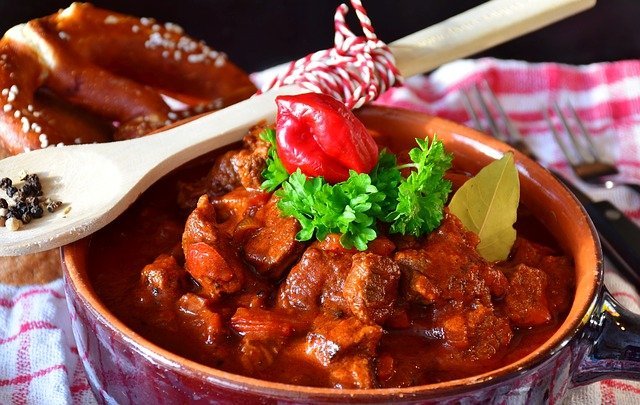 The Christmas Market is not the ideal place for a bowl of gulas, because you have to find a table to stand at. Additionally, there's something that feels wrong about eating this meal made for a hunter out of a flimsy plastic bowl with a plastic spoon. Nonetheless, a few times each night, you'll see someone battle the accidental elbow bumps and jostles of the crowded and jovial Christmas Market while carrying a bowl of gulas that looks like its about to burn through the plastic bowl. For those unfamiliar with the dish, gulas is a seasoned meat stew.

Mastny chlieb is a piece of bread covered with a little lard, sprinkled with some paprika and salt, and topped with onions. It's name translates as "greasy bread." It takes time for an American of my generation to get over how incredibly atrocious the concept is as a food. It is lard smeared on bread. The television (which, of course, never lies) taught me that butter is terrible for a human being to ingest and lard even worse. After getting over that fact, I came to recognize how delicious an occasional slice of bread slathered with lard and topped with onions can be.

Langos is leavened potato dough, allowed to rise, before it is rolled out and then deep friend. Like lokse, langos can be topped with anything. I recommend – garlic butter, sour cream, cheese and a little ketchup. 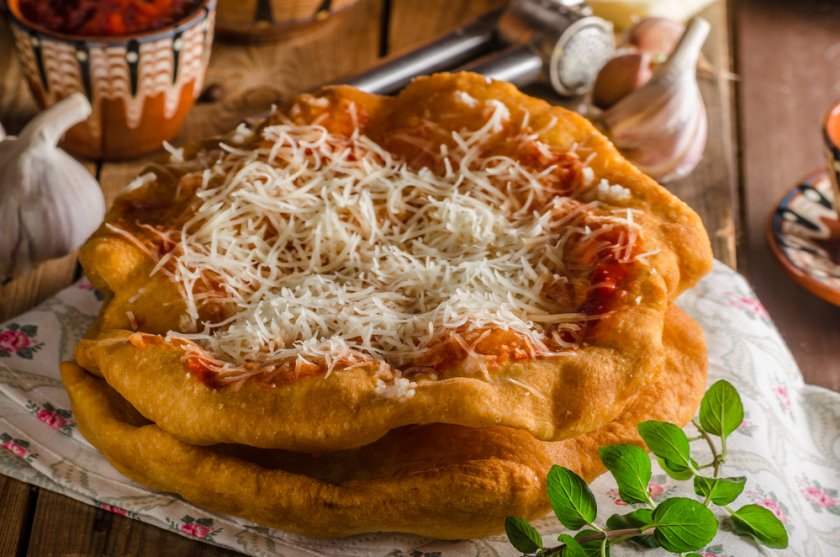 Though it be hard to make and greasy to eat, langos, especially of the homemade variety, is delicious.

This is a cheese that is popular for pickling in oils, vinegars, spices, and brines, and is served in bars throughout Central Europe. It has a white, slightly waxy exterior, coated with a layer of soft white mold. At the Christmas Market, these rounds are often served as a vegetarian option to a ciganska pecienka ("gypsy liver"). Hermelin is especially enjoyable to eat warm because of the difficult to melt, firm outer layer. It's easy to grill the cheese to the point where the cheese is melted inside, but kept together in its outer casing. It can be conveniently placed on a bun with toppings like sauteed onions, sauces, and spicy peppers akin to a ciganska. When you bite into a fried hermelin sandwich, the result is a glorious flow of molten cheese.

Akin to buttermilk biscuits in American cuisine, pagac are down-home country food that outsiders might not truly be able to appreciate. Like virtually all Central European foods, there are countless pagac variations. The best pagac, in my opinion, are fresh from the oven, have oškvarky (link to oškvarky) inside and leave a little grease against the tooth when bitten into. The French have their croissants. The Slovaks have their pagace. Neither of them are any good when mass produced. Both of them are delicious freshly made in small batches. Many rich layers are common. Brushing the top with salt or caraway seed is popular. If you get a chance to eat a pagac fresh from the oven, do not ever pass up the opportunity.

Hriato is a winter drink from the village and beloved by tough Slovaks. You can imagine a woodsman or hunter welcomed in out of the cold with this drink. It's a warm shot of homemade alcohol (52% Slivovica – "plum brandy" – is popular for this purpose) that has a layer of melted bacon grease on the top of it and a little caramelized sugar stirred in. It's worth pointing out that this drink tastes better than it sounds.

"Tea with rum" is a favorite of hikers and skiers in cold Slovak climes. A few hours in the cold requires a warm tea and the rum seems to make the tea better at warming the body. Take note of the fact that EU membership imposed silly rum labeling restrictions on Slovakia (and every other country). Basically, some guy from France came along and said "What you lowly Slovaks sell is not Rum, it's something inferior. Rum is what we make in our colonies. Find some other name. As long as you're in the EU, you will not use the word 'rum' to refer to the product you produce."

The ingenious Slovak producers of "the product formerly known as rum" came up with some quick ways around this law. A trip to the liquor aisle of any sizeable store will demonstrate the wit and variety of the solution with bottles labeled "R," "R-35," or "Run." By far the most popular label for this drink, however, is "Um." Um is such a popular moniker for the drink that Slovaks once called Rum that you will even see restaurants using this on the drink lists of their menus.

Medovina is 'wine' made from honey. It is almost always served warm and is most commonly sold during colder months. Bottles of medovina are on sale at the Christmas Market and so are individual glasses of warmed medovina. Each year, at least three or four stands at the Christmas Market will sell nothing but medovina from different types of honey (based on the trees that the bees were among) and in different types of bottles (ranging from bottles in the shape of cute little teddy bears, to the shape of life-sized rifles). At this time of year it is a popular gift.

It's not uncommon to be offered a small mug of this after coming in from the cold. Medovina's sweet with a little alcohol. Because you don't want to bring medovina to a boil, as it will give off its alchohol as vapor, a good way to warm it is to warm a pot of water to a little higher than the desired temperature of your medovina and to submerge the loosely capped bottle of medovina in the water. In 10 or 15 minutes you will have a warm mug of medovina. Be careful not to do this immediately after bringing a bottle of Medovina in from the cold as the sudden change in temperature may crack the bottle. 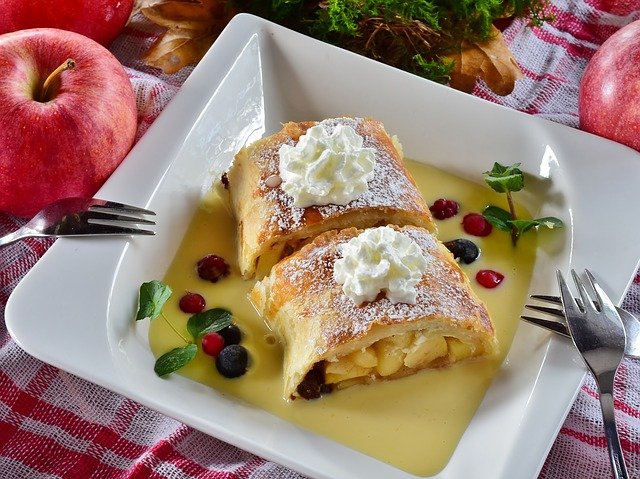 Once upon a time, some unknown pastry chef, to whom I'm greatly in debt, came up with the idea that a dessert could be less of the unpleasant crust and more of the delicious filling. She dared to dream. She pared the crust down to a few layers of light flaky pastry and filled the rest of the desert with nothing but the densest, most delicious and satisfying things – shredded apples and cinnamon; walnuts, walnuts, more walnuts and a little honey; cheese, sugar, and eggs; and the greatest dessert anywhere in the world – mak, poppy seed, so thick, so rich, so deliciously earthy in taste. It took me years of disappointment before I realized something – you can't buy a mass produced poppy seed strudel in Slovakia that tastes very good. The generosity of ingredients that is required to make a delicious strudel just doesn't seem to exist in a Slovak grocery store in the year 2010. You need someone to painstakingly make it for you out of love, or you need a place like the Christmas market where you can browse dozens of homemade options before settling on the strudel that best fits you.