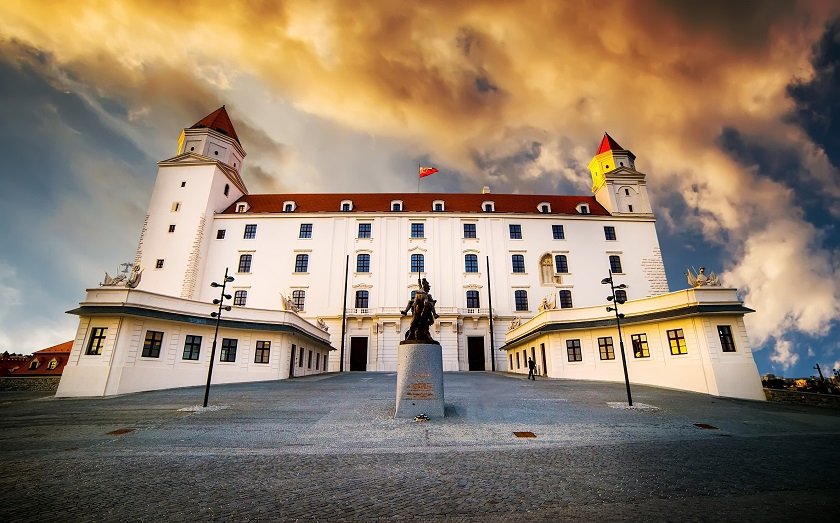 The castle dominates over the city of Bratislava on a hill overlooking the river Danube. The first written reference to Bratislava is found in Salzburg Annals of 907, relating to a battle between Bavarians and Hungarians. The castle hill was populated as early as in the late Stone Age but the first known inhabitants were the Celts who had founded a fortified settlement here – 'Oppidum'. The border of the Roman Empire 'Limes Romanus' ran through the area over four centuries. During the Great Moravian Empire, Slavs built a fortress that became a significant centre at the time.

In the 10th century, Bratislava became an integral part of the growing Hungarian state, with stone palace and the church of St. Salvator being built on the castle hill in the 11th century. In the 15th century, during the reign of Sigismund of Luxembourg, the castle was built in Gothic style as an anti-Hussite fortress. During this time, a new entrance to the castle was built on the eastern side - the Sigismund gate, while seven-metre thick fortification walls were built on the western side and a castle well was constructed in 1437. Its depth is 85 m with the water table at 42 m. In the 16th century, King Ferdinand ordered the castle to be rebuilt in Renaissance style. In the 17th century, when the castle became the seat of hereditary province chief Pálffy, it was rebuilt in a baroque style.

During the reign of Maria-Theresa, the castle was furnished for her son-in-law - governor Albert of Saxony and Tessen, who was a fervent collector of arts and who installed his works at the castle. This collection was later moved to Vienna to become today's Albertina gallery. Under the reign of Joseph II, the castle housed a general seminary to educate priests. Later, it served as barracks for soldiers until it burnt down in 1811. The present reconstruction was carried out as late as 1953 - 1968.

Today the castle serves the Slovak Parliament and houses collections of the Slovak National Museum, exhibitions of Treasures from the ancient past, as well as the Museum of History. 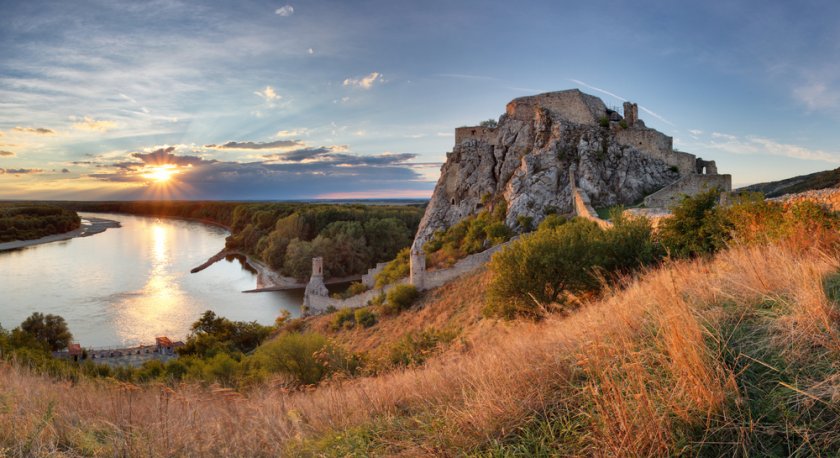 The mighty fortress above the confluence of the rivers Morava and Danube is one of the most significant archaeological sites in Slovakia. The oldest traces of settlement date back to 5000 BC. In the 1st century BC, the territory was populated with Celts. At the times of the Roman Empire, Devín was an important military station and, at the times of the Great Moravian Empire, the castle was a significant boundary fortress as well as one of political and administration centres. The first written reference comes from 864. After the fall of the Greater Moravian Empire, the castle served as a border castle of the Hungarian state. Later the castle changed its owners several times. In 1809, the castle was blown up by Napoleonic troops. The castle is a national monument of cultural legacy belonging to the Municipal Museum at present.

Archeological works are ongoing at the site. According to the daily Sme, in the last five years archeologists uncovered the remains of a Roman tower from 1st century AD, fragments of ceramics and a prehistoric settlement. 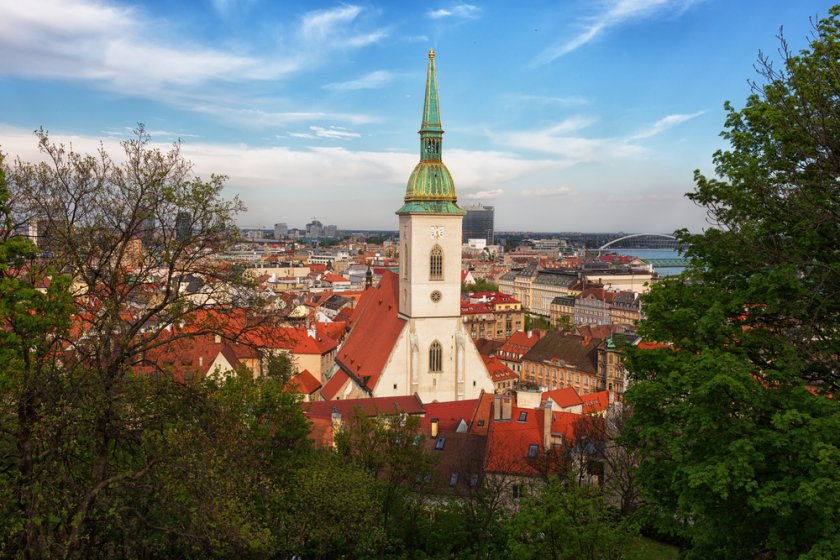 The three-nave Gothic church was built in the place of the original Romanesque church. Building was started at the beginning of the 14th century and it was consecrated in 1452. The dimensions of the church are also remarkable: length 69.37 m, width 22.85 m, height 16.02 m. Several chapels were added to the church - Gothic chapel of St. Sophia, widow after the Czech King Wenceslas IV, chapel of St. Anna and baroque chapel of St. John the Almoner.

The tower of the church was constructed simultaneously with 3 naves of the church, while it was an integral part of city walls serving to defend the town. Its height is 85 m and there is a gilded pillow of dimensions 2 m x 2 m on the top, while a 1 m high copy of the Hungarian royal crown weighing 300 kg is placed atop this. In the 16th century, the Dome witnessed the coronation of Hungarian Kings. During 1563 - 1830, 11 Hungarian Kings and eight royal wives were crowned here. Beethoven's Missa Solemnis was played for the first time in this church. 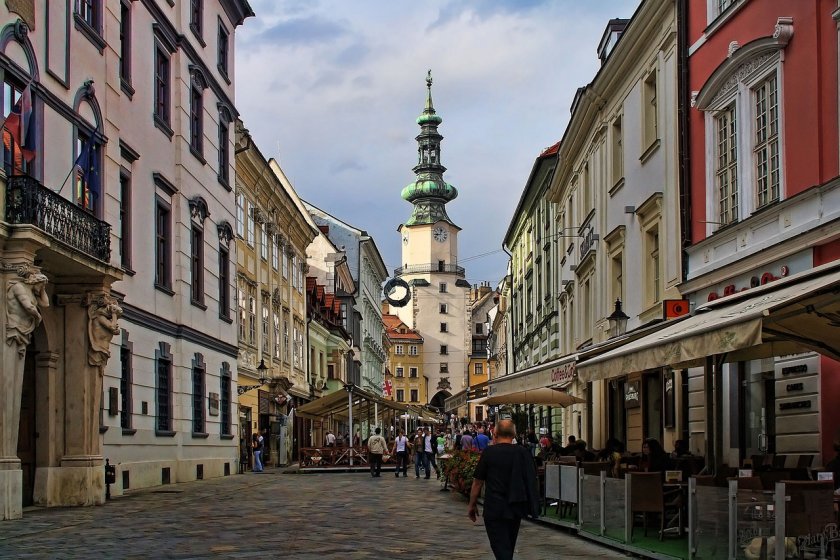 The only preserved gate of the medieval city fortifications. Its Gothic foundations were laid in the 1st half of the 14th century. During 1511 - 1513 it was heightened, and during 1753 – 1758 it was rebuilt into its present appearance when a statue of St. Michael was placed on the top of the 51-metre high tower. At present, the Museum of Weapons and City Fortifications is located within the tower. A very nice view of the old city is provided from the tower. 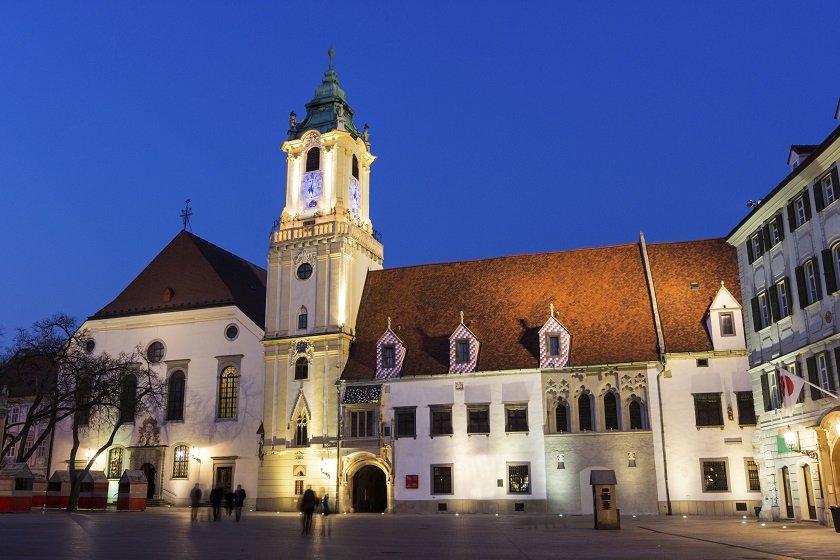 Classicist palace built during 1778 - 1781 on the basis of designs by Melchior Hefele for the archbishop Jozef Bathyány. In the attic of the roof, there are allegorical statues by J. Kögler and F. Prokop as well as vases by J. A. Messerschmidt. In the top of the tympanum, there is the coat of arms of Jozef Bathyány and a cardinal's hat weighing 150 kg. A mosaic by Ernest Zmeták is placed in the tympanum. Statuettes of angels in the facade are holding the letter I - Iusticia = justice and C - Clementia = graciousness - the personal motto of the cardinal.

In the entrance hall of the palace on the right-hand side, there is a memorial tablet commemorating the signing of the so-called Peace of Pressburg in 1805, while a fountain of St. George can be found in the courtyard along with the entrance to the chapel of St Ladislaus in the corner. On the first floor there is the Mirror Hall, which hosted the signing of the Peace of Pressburg in 1805 between Napoleonic France and Hapsburg Austria after the battle at Austerlitz. King Ferdinand signed the document here on the abolition of serfdom in Hungary in 1848.